Here is the 'Cats Meow' my fourth finish for Sew Its Finished. This is only my second full quilt finished since I started quilting (past 18mth). It was a kit that I fell in love with in 2008. Not sure if my taste would choose this these days, now in love with all lovely bright modern colours.
It is quilted in the ditch, that is all my skills are capable of. I am quite proud of myself.
﻿Now it is time to find something to do.....only another six to do off my first UFO list.
Regards Sandra
Posted by Craft to Do at 5:24 PM 13 comments:

Email ThisBlogThis!Share to TwitterShare to FacebookShare to Pinterest
Labels: 4th Finish, Craft to Do, Sandra

Moda... the Cutting Table: Quilts for the victims in Joplin

Moda... the Cutting Table: Quilts for the victims in Joplin
Posted by Karen at 10:44 PM No comments:

Though only small I have finished my 8th UFO. 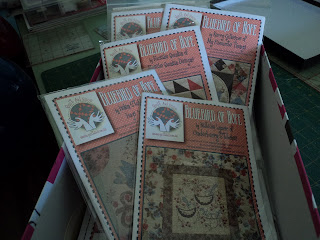 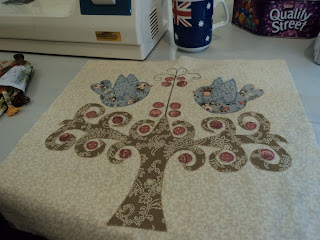 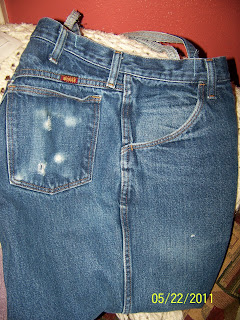 Always ready to use whatever scraps, pants or fabric is being tossed out, I grabbed a pile of my husbands jeans awhile back he was going to toss and decided I would cut them up for a rag quilt.

Saturday evening however, after another of my flimsy recycled shopping bags ripped, I sat at my trusty machine and made myself a bag to take to the market.

I left all the pockets open so if I am making a quick trip, I can toss my cell phone and wallet in them. On the way home, I can place smaller items like gum, candy, etc. that might get smashed on the bottom.

It took about 15 minutes from start to finish and now I have received 3 offers for people that want one.

It is another UFO completed!

Posted by Quiltingranny at 11:41 PM 5 comments:

Hi there, I'm very happy to share my second Sew It's Finished finish.  I finally got this little runner quilted and bound yesterday.  It is Skinny Verna made in the beautiful Martinque fabric by 3 Sisters.  I love this fabric, and am thrilled to have actually finished something with it. 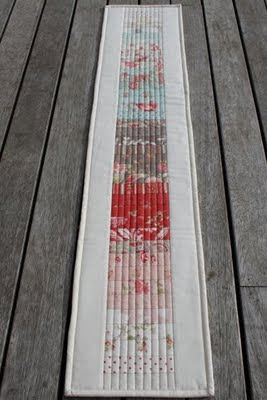 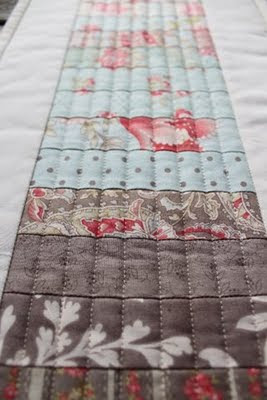 I have a very long list of WIP's to tackle, but it still feels good to cross one off!
Thanks for looking.....happy stitching........Nicky
http://farmgirlstitching.blogspot.com/
Posted by Nicky at 7:20 PM 7 comments:

A Prize-Winning Finish ( ♪ with a little help from my friends ♫)!

WARNING:  Saga ahead.  Feel free to skip to the pictures.

I have been participating in the SLC Home Machine Quilting Show design challenge for the past five years.  A sponsor supplies the fabric, and individuals or groups design and make a quilt based on certain guidelines such as theme, size, additional fabrics, etc.  These quilts are displayed during the show, then auctioned to raise money for charity. 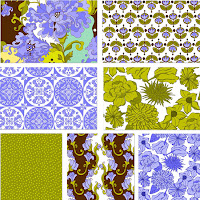 Riley Blake Designs sponsored this year's challenge, donating $1,000 in prize money and "Isabella" fabric by Lila Tueller.  I signed up again, and received the kit of fabric and batting last December.  Other things took priority (quilting, writing patterns, teaching classes, etc.) and before I knew it, there was only one week left until the deadline for the challenge!

My friends Debbie and Tricia came to the rescue, and we went to work.  Debbie always says, "Now why are we doing this again?"  My response: "Because it's fun!"  (We've also won prizes each time, which makes it more fun--1st, 2nd, 2nd, and 3rd place, consecutively).  But it seems we always leave it to the last minute, then have a quilting frenzy getting them done.  Most years, we are stitching on the binding/label as we drive the 50 miles to deliver the quilt...  We don't call ourselves "The Midnight Quilters" for nothing!  Besides, I had to wait until the fabric "spoke" to me to tell me what it wanted to become, the same process as in previous challenges.  What does this fabric tell you?

To me, it had elements of turn-of-the-century style, Gibson Girls, Mary Poppins, and "The Music Man" (I played Marian the Librarian's mother in a community production).  I was thinking hats in a store window, Tricia thought one hat, and while searching linline, Debbie found a picture of a hat stand.  That was it!!  Then the quilt practically made itsself.  We chose hat styles that could feature the fabrics best, and made little parasols and a purse to use the remaining fabric.

It was my job to make the base of the quilt, which had to be constructed from the outside in.  I fussy cut the brown wavy stripes so as not to lose the design, mitered the corners at the perfect spots, then filled in with more fussy cut stripes, and finally the center of the quilt, stitching exactly on the lines of the print.  It could not have been more perfect.  Deb worked on the individual hats whileTricia started making the dimensional roses.  I drew and cut out applique shapes, starched the edges around cereal box templates, then turned it over to the girls to lay out and stitch down.  We worked until midnight for a couple of nights, then it was my job to get it quilted--stopping at about 4:00 am, then finishing the next day.  We had more fun loading up the embellishments and making the quilt come to life with details such as ribbon, feathers, the roses and rosebuds, beads, buttons, snaps.  And a clip-on bird.  A neighbor stopped by, wearing just the perfect beaded earrings, which she donated for the green hat.  And when I added the wire-edged satin ribbon at the bottom, Debbie thought she was just going to be sick.  Tricia and I voted her down, and the ribbon stayed.  The girls finished the binding and the quilt was done.  Almost.  It needed just one more rosebud to fill a spot, which I finished stitching as we drove down the canyon to get it in on time.  When we saw all of the beautiful workmanship and fine quilting of the other 22 entries, we said to ourselves, "Well, that was fun" realizing that the competition had gotten tougher, and hoped for the best. 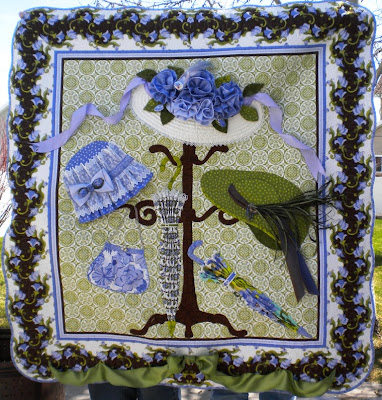 But the best part came a few days later, when all the quilts in the challenge were sold at auction for the charity "Lifting Liberia" to help build schools in Africa. The auction brought in nearly $4,500. And even more amazing--our little quilt raised $850 for the cause, sold to a happy woman from Idaho.  Boy, do I love quilting--everyone wins!!


Whew, finished!  Thank heaven for friends!  Now, on to the next project!  UFO Sightings

Email ThisBlogThis!Share to TwitterShare to FacebookShare to Pinterest
Labels: Deonn 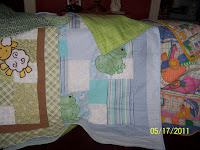 Thank you to Wendy for inviting me to participate in this blog. I just wanted to show you all that this week, I have finished 4 baby quilts for little ones that survived the tornadoes of Alabama (United States) and their families did not.

Having this blog on UFO's helps me to complete my quilts and get rid of some of my stash as I feel accountable to all of you who are working so hard to complete your UFO's.

Simply put, this is a great support group for all of us quilters who say we never have the time to finish anything.

I have found a new home.

If anyone wants to stop by my home blog check out the Quilting Ranny at:
http://www.quiltingranny.blogspot.com 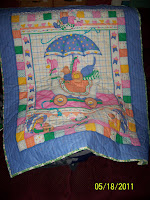 Posted by Quiltingranny at 12:14 AM 4 comments:

I started this cute little wallhanging when I saw it in the Homespun (Issue 11.7) last year...  A very cute design by Natalie Ross
It's great to have it finished and posted it off to a new home.... 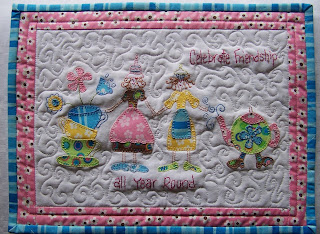 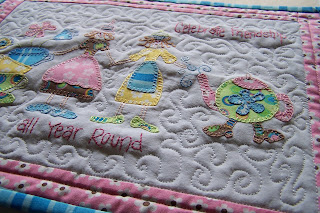 I made another bag. Finish no 7.

I bought this pattern almost two years ago. It's from a norwegian designer AnnaKa. After I bought the fabric it took me one year to finish it. The pattern is written in Norwegian, so I was a little afraid to make it. But the pattern was very easy to follow. So It was a piece of cake to finish the bag.

Groetjes Mai
Posted by Anonymous at 4:33 AM 8 comments:

My first finished this year and it is a re-finish

About 5 years ago I made a "Jeu de l'Oie" wall hanging from a pattern in "Marie-Claire Idees" for the birth of my friend's daughter. The "Jeu de l'Oie" is a traditional French board game. 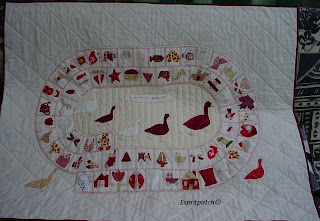 The quilt took a few months to make as I did all the applique in each individual "square" by hand. She received her present when she was about 6-month old. 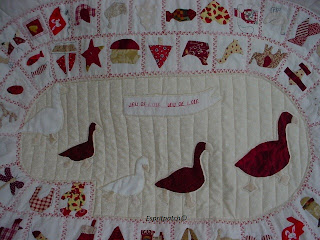 My friend hanged the quilt in her daughter's bedroom. However they remodelled their house about 2 years ago when baby # 2 was born and the quilt was too big for the new bedroom. As there was quite a large "border" around the quilt, my friend asked if I could trim the quilt to a smaller size. Of course I agreed and took the quilt back to reduce its final size. I took the binding off and trimmed the quilt off last year in the Spring. I then sew the binding back on again. Once the binding was on, I realised that I had stitched it to the back of the quilt rather than the front. I hate unpicking so I decided to try a decorative stitch on the front to finish the binding, also thinking that would be the faster option. Well, it looked awful and I really hated it. I only did half of the side length but the binding was moving slightly and the stitches were not consistant so that meant more unpicking to do :-( I was so annoyed with myself that I put the quilt aside and didn't touch it again until about a month ago when I was determined that the quilt would go back with my friend next time we saw each other (which was planned for last week-end). I took the quilt with me when we travelled back to France for our holidays and spent the journey unpicking my horrible decorative stitch. When that was finally over, I could sew the binding back on, making sure I put it on the front of the quilt this time. I blind stitched it on the way to our week-end and finished it off during the week-end so that I could finally hand it back (about half an hour before we all left). 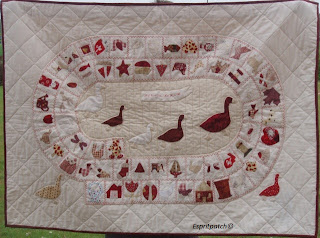 Anyway, I am really pleased that I could hand it back over to my friend and that meant I could also cross this long-standing UFO off my list.
Celine
Posted by Celine at 12:21 AM 6 comments:

I know this is not

I know this is not sewing BUT it was definitely a real UFO.  On the May 1st 2010 I did a post on how I only had to solder and putty my window.
Finally yesterday I have achieved it and the window is done. Just over a year later. 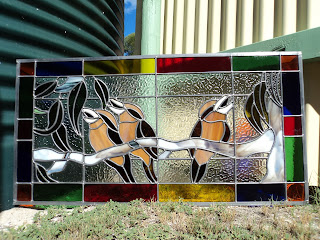 This is a finish I am very pleased with. You can read more on my blog.

I am finally getting around to sharing a couple of finished UFO's! First up is just a simple four-patch which I quilted myself :O) 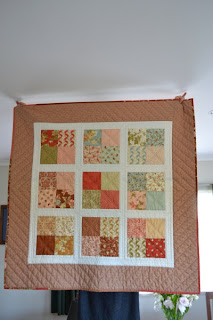 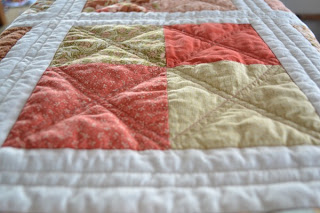 Its been washed to give it that lovely crinkled look! I have also finished two more quilts, one for him(DH) and one for her(ME)... 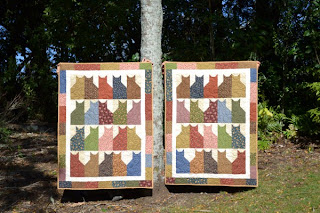 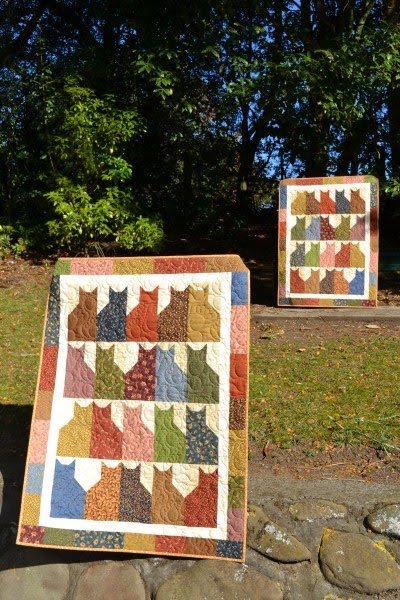